I can’t leave before the end

Last Sunday I went to my second football match of the season. I’m not a great fan of the sport but my family is and I won’t let them have a lads day out without me. We went to Southampton, home of the Saints, to watch them play Manchester United. As Man U supporters, they had to sit on their hands so they didn’t leap into the air shouting with glee when their side scored. As a neutral I was hoping for goals and excitement – and I got it. Live sport is so much more thrilling than on the television. The buzz of the crowd can never be captured by cameras, nor can seeing the build up of the goal across the whole pitch, rather than through the man with the ball. 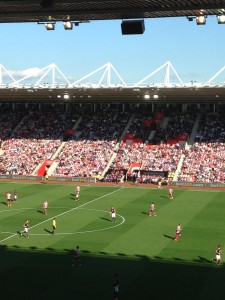 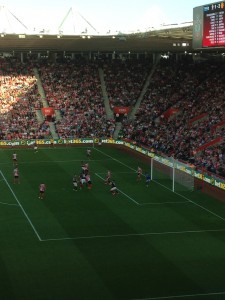 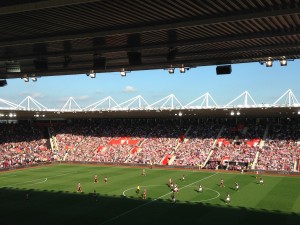 Yet incredibly, with their side only 1-3 down, the Southampton supporters started trooping out after 80 minutes. What? That’s the whole point of sport, surely. Two quick tries, two quick wickets, two quick goals and it’s a different game. Southampton pulled back to 2-3 and in the last five minutes the Man U goalie had to pull out some fabulous saves to win the game. It was gripping, edge of the seat stuff – even for a neutral. Still, I guess the supporters who left arrived home half an hour earlier than the rest of us, and perhaps they enjoyed listening to the action they’d missed on the radio?

The apples continue to fall from the tree in their bucket loads. And look how many more of the little devils are still left. 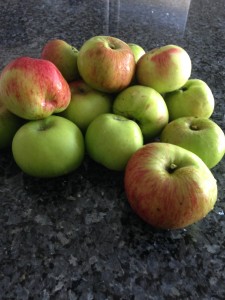 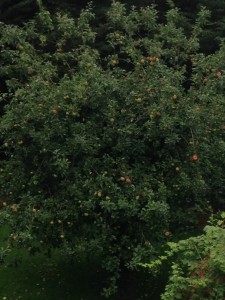 I’ve done crumbles and pies and apple betties. I’ve frozen some. Now I’m craving blackberries, rhubarb. Heck, you could even tempt me with a gooseberry…