When is it too early to talk about Christmas?

People seem to sit in three camps when it comes to Christmas.

In Camp One the mince pies are cooking in the oven, the cake was made last month and the cards are being lovingly crafted using glitter and stencils. In this camp, Christmas is the focus of the year.

In Camp Two they know Christmas is coming, know they have a lot to plan but are going to carry on sticking their head in the sand for a while longer before they start doing anything about it. In this camp, Christmas is okay as long as it sticks to December.

In Camp Three, they switch over at the first sign of a Christmas advert/programme, avoid the high street for the next two months and get on a plane to somewhere hot and sunny from 20th December for two weeks. In this camp, they’d rather we didn’t have Christmas at all.

As a child I was firmly in the first camp, without the baking of mince pies/cakes or making of cards. Basically, it was all about Father Christmas and the presents he might bring me.

As an adult I’ve been sat in the second for a long, long time, wandering briefly into the first camp for a few years when the boys were small as I shared their excitement. Though again, there was no baking or card making involved…

This year, I marched right back into the first camp again – thanks to my latest book, A Second Christmas Wish. I wrote it last year (during Easter…) but I’ve known it was coming out since the start of this year, signed a contract for it around Easter and started editing it during the summer. So Christmas has definitely been on my mind all year. But no, of course I haven’t made the mince pies, cake or cards. I haven’t had the time, what with all the writing and editing.

Well here we are, the first week in November, and I’m excited to tell you A Second Christmas Wish has just been published on Amazon (and all other eBook platforms). 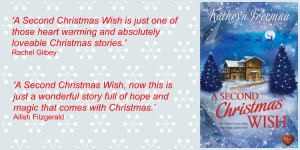 So if you’re one of those people who don’t want to think about Christmas until December, perhaps you could bear it in mind? Even download it onto your Kindle, ready to get you into the Christmas mood. If you love Christmas anyway, you’ve already made the cake, bought and wrapped your presents, written your hand crafted cards and have so much time on your hands now you’ll surely be able to catch up with some reading?

And if you’re firmly stuck in Camp 3 and rather Christmas didn’t exist, perhaps you could ignore all the tinsel, fairy lights and pine trees, and focus on the romance?!