It’s 800 years since the Magna Carta was sealed by King John “in the meadow called Ronimed between Windsor and Staines on the fifteenth day of June in the seventeenth year of our reign.”

As I live opposite that meadow in Runnymede, I thought I’d better find out a bit more about it. Especially as locals believe the document was actually sealed on our side, perhaps near this priory, built in the twelfth century. 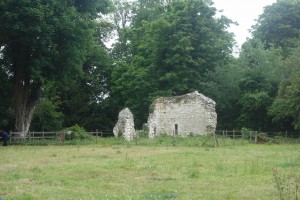 The Magna Carta declared the sovereign to be subject to the rule of law and also provided the foundation for individual rights that we see today in both English and American law.

“No free man shall be arrested or imprisoned or disseised or outlawed or exiled or in any way victimised, neither will we attack him or send anyone to attack him, except by the lawful judgment of his peers or by the law of the land.”

Apparently though, by August of that same year Pope Innocent III had annulled the Magna Carta, declaring it illegal and having been sealed under duress. But there were too many witnesses for it to be denied or forgotten. Up to thirteen copies were quickly made and sent throughout the kingdom – the modern day equivalent of the Magna Carta going viral.

As part of the Magna Carta celebrations, there was a river relay from Hurley to Runnymede. We trooped down to the river with friends to watch it sail by, complete with bottle of fizz (it seemed appropriate) a few nibbles and a picnic blanket. Suffice to say, the fizz and nibbles were definitely the most entertaining part of the relay. Don’t get me wrong, I like sitting by the river watching boats. It’s just when the occasion is built up to be a ‘river relay’ I’m geared up to expect something more than … well, boats sailing down the river. 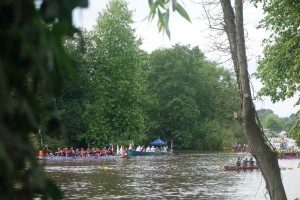 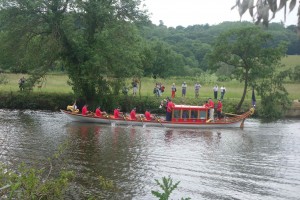 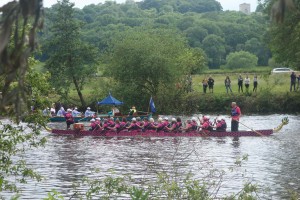 I had the same sense of disappointment when I watched the Diamond Jubilee river pageant. At least this time, rather than standing for 5 hours in the rain, I only had to walk across a few fields and watch in the sun. Gloriana, Her Majesty’s Row Barge, did look very pretty: 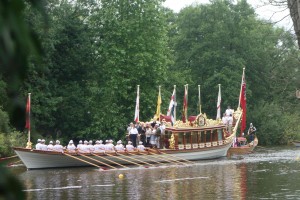 And the fizz slipped down very easily 🙂