What have the Roman’s ever done for us? It’s a famous Monty Python sketch and one that takes on new meaning if you get the opportunity to visit Rome. They were such clever, forward thinking people.

Take, for example, the Trajan market – the first shopping centre.  We marvel at the Trafford Centre, MetroCentre, Westfield and Bluewater but the Romans got there two thousand years before us. And not a Starbucks in sight. 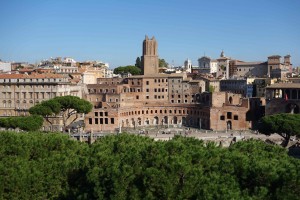 Did you know that the Colosseum was built in only eight years? About the same time as it took us to build Wembley stadium. Granted slave labour didn’t require quite as many rest hours, but I wonder if people will be flocking to see Wembley in the year 4000? 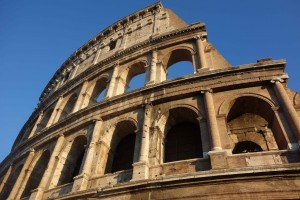 The Colosseum gets its iconic half demolished shape courtesy of an earthquake. The marble that fell down was used to build St Peter’s, another incredibly impressive sight in Rome that draws the visitors (photo below at night – had to include because my hubby is very proud of it…). 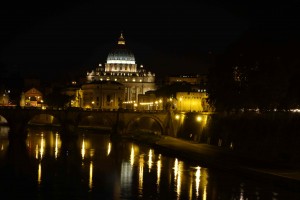 If you’re prepared to pay about three times the usual entry fee you can jump the never ending queue to the Sistine Chapel by taking a tour. We did, not just to save time but also because you gain so much more insight from a guide. I like the little details. For example the fact that The Last Judgment contains the only self-portrait of Michelangelo, painted into the flayed skin being held by St Bartholomew. One theory of why he drew himself this way is that he hadn’t been paid fully and felt he was being skinned.

He also got revenge on one of his detractors, Master of Ceremonies Biagio da Cesena, who had critisised his painting of so many nudes “it was mostly disgraceful that in so sacred a place there should have been depicted all those nude figures, exposing themselves so shamefully.” He painted Cesena’s likeness into Minos (judge of the underworld), giving him donkey’s ears and a snake to cover his nude body. If you click here and look at the picture, you’ll see the snake appears to be targeting the poor guy’s private parts. Considering how many millions of people traipse through the Sistine Chapel every year to study this painting, I would say Michelangelo’s revenge was very sweet.