It started with a single buzz. I was lying in bed, trying to get to sleep, but the noise was driving me mad. I dug my husband in the ribs.

‘Sort out that fly.’

He raised a groggy head – he’d already zoned out. How can anyone fall asleep with the buzz of a fly in their room? My grumpy husband turned on the light and we kept still, trying to locate the source. We couldn’t see the damn thing, just hear an intermittent buzz. On a 0-10 loudness scale it was only a 1, but on an annoying scale it was off the chart. Well, my chart, anyway. Besides, it wasn’t just the noise. It was the thought of that fly crawling over my face while I slept.

Now we converted most of our loft into a bedroom and study, so it’s pretty easy to get into it. You just go into my study (next to the bedroom), open a door and hey presto, the loft. So hubby squirted a can of fly spray indiscriminately into the space, shut the door, turned off the light and went back to sleep.

A few minutes later, there wasn’t a single buzz…there were thousands of buzzes. It sounded like an army of really, really pissed off flies up there.

I dug my husband in the ribs. I knew he couldn’t do anything, but why the heck should he be allowed to sleep while I was wide awake and imagining Alfred Hitchcock’s The Birds, only with a smaller flying variety.

‘They’ll be dead soon,’ came his helpful reply. Then rolled over and went back to sleep.

Eventually, so did I.

The next morning we hoovered up thousands of the blighters, but they weren’t finished yet. Sitting in my study, I was visited by over a hundred flies that day. I know, because I was sad enough to count them as they, presumably, squeezed through the crack in the attic door and headed for the light of my window. They didn’t come all at once. Just in dribs and drabs, as if they’d had a meeting and decided how they could be the most annoying. At least having to get up every few minutes to open the window was good for my circulation. 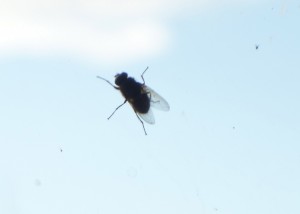 Obviously we’ve researched into this and it seems we were graced with cluster flies (also known as attic flies). Slightly larger than the housefly and slower moving (not that you’d notice when you’re trying to swat one) they like to hibernate in the winter in warm lofts. A lot of times they go unnoticed, simply exiting in the spring the same way they came in. But in our case they were like a noisy neighbour sharing the same loft space, albeit a door and few pieces of MDF away.

In the end, we humans kicked them out and won our space back. It’s been several days since I’ve heard a buzz.

Perhaps that’ll teach them to be a bit quieter next time. At least while I’m trying to get to sleep. 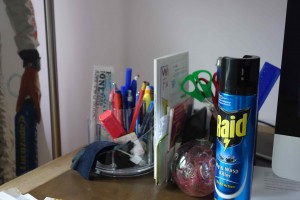 (Photo of desk – with fly spray and arm of Jenson Button. If you’ve not been following my blog and are confused – see my earlier post from October 9th!)