Writing The End is really only The Start

Those of you who read this blog on a regular basis (thank you Mum) will know that back in March I began to write my Christmas book – provisionally titled The Christmas Hotel. I even wrote a blog post trying to work out how long I thought it would take me to finish it. Yesterday I reached a major milestone. 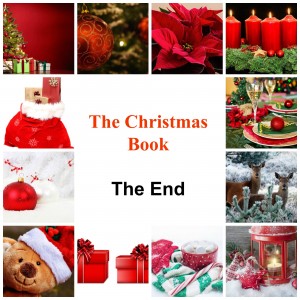 Yes, 61,000 words later (as this is a Christmas novella, not a full length book), I wrote The End. And those are two of the most satisfying words to write in a book. The other two are Chapter One. The latter brings excitement, a sense of everything being possible. This could be IT, the book that propels me to mega stardom. By the time I’ve written The End, all thoughts of stardom have withered away. Not because I think the book isn’t great, you understand (heavens, I don’t want you, my potential reader, thinking that). No, it’s because somewhere after the first few thousand words I start to focus entirely on the characters, on the plot. I forget my reader, forget my publisher. Forget everything but the story. I have, on occasion, even forgotten to pick the kids up from school….and I certainly forget all those jobs my husband gives me because he thinks, as I’m at home, I’m not working.

Before you start thinking wow, she’s smashed her target (which was submission to my publisher by end of June), writing The End is really only The Start of the process. Before I submit it to Choc Lit I will have to go through the manuscript several more times, picking up the obvious flaws (her eyes went from brown to green. He had one arm round her waist, one cupping her face, and one holding her hand), smoothing out the writing. Hopefully not cringing too much at some of the things I’ve written.

I also have to try and persuade someone to read this raw manuscript to point out the gaping plot holes I’ve missed. Luckily my husband has volunteered for the task…okay, okay, of course he didn’t. But he will.

Now I just have to hope that when I read it through again, what seemed like a really great idea when I was writing it, doesn’t seem like a disaster of an idea when I’m reading it…