We have a pond. Originally at the bottom of our garden, last summer we moved it so it’s next to our patio. Well, the men in my family dug the hole and ferried the soil back and forth. I provided encouragement. Here it is – photographed from my upstairs study. 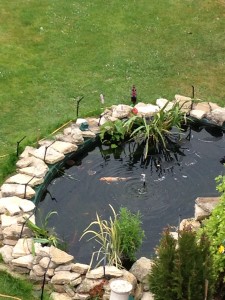 Why did we (okay, okay, they) move the pond? Because we hoped having it closer to the house wouldn’t just let us enjoy it even in the winter. It would deter the herons from using it as an eat-as-much-as-you-like buffet.

After a fashion. Yes, we enjoy the fish more. We even splashed out (pun not intended but I wish it had been) on two large koi, Vardy and Mahrez, to join our smaller, more timid school. They provide more than just a flash of beautiful colour as they glide up and down. I refer you to my previous post (20th April) on their dolphinesque antics. These continue, though I still lack the photographic evidence. The orange dot on the right of the second photograph is my latest attempt to catch Vardy leaping. He was, honest. 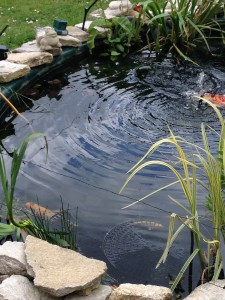 As for the herons, they remain arrogantly undeterred by the presence of the pond nearer the house. Or by the double row of fencing now surrounding the pond. Or the two heron scarers that squirt water at anything that moves in front of them – including unsuspecting humans.

Yesterday I caught this fellow eyeing up our fish from various perches around the garden (peer closely – he is there). 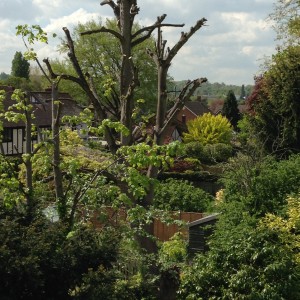 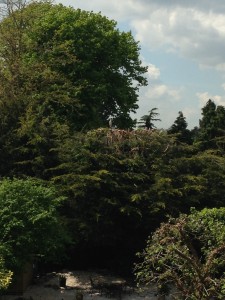 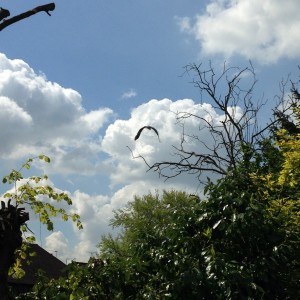 I should have been focussed on writing. I shouldn’t have been looking out of my window. Nor should I have bounded down the stairs each time I saw him stalking near the pond. But I did, because there was beauty in the arrogant way he stared at me. And, as a mother instinctively protects her children, I instinctively wanted to protect my fish.

So now we’re locked in a battle that will take us through until the temperature cools, and the fish keep low in the water. He has his eyes on my fish. I have my eyes on him. 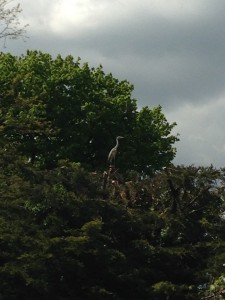 As for the Christmas book word count, it now stands at 48,100. So I have been doing something, in between the heron spotting.