Goldfish can be ruthless.

We have a very special goldfish in our family. Previously called Bubbles, he’s a telescope-eyed goldfish which means he has, or did have, two bulging eyes. We’ve had him for more years than I can remember and he’s not the brightest fish in the bowl. About five years ago he managed to get stuck up the tube we used to suck out the old water. When we managed to extract him he had one – extremely bulging – eye and one flat eye. 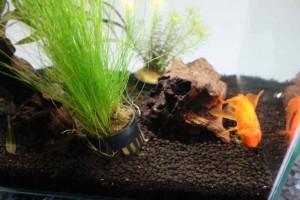 We thought that was it, he’d never recover, but no, our hardy little goldfish, now renamed Googley Eyes, kept on swimming. Other fish came and went, but Googley persevered. Over the last few months though, he’s looked a bit tired and has taken to lying at the bottom of the tank. We’d think he was dead, but as soon as the lid to the tank was opened he’d scamper up to the top to be fed (fish aren’t as stupid as you think). The other fish seem to have sensed this weakness and started to bully him, nudging at him when he was lying on the bottom. Last week was the final straw. I came down to find Googley on his side at the bottom of the tank and all three fish nudging him.

This is it. He really is going to die.

I did some hasty research and found that goldfish tend to nudge for two main reasons. Mating, but I didn’t think that was the case. My gut tells me he’s a boy. A girl wouldn’t have been so dumb as to swim up the tube, would she? Which left us with the fact that they were attacking him because he was displaying signs of weakness. Goldfish can ruthlessly attack a sick fish, an instinctive response to protect the other fish from coming down with the problem.

I couldn’t bear to see him being attacked so I rushed out and bought another tank (no, we won’t say how much that cost). When my husband came home he took one look round our kitchen and said. ‘Bloody hell, we’re surrounded by fish.’ It’s true, we now have two tanks there, one on either side, but I couldn’t put Googley somewhere else could I? He loves company, and the kitchen is the most frequented room in the house. 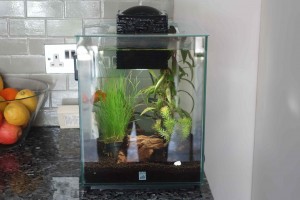 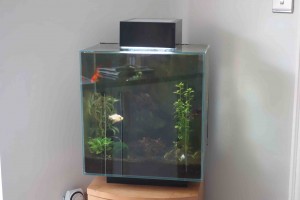 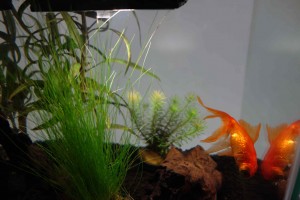 Googley survived his ordeal and is now swimming happily in his very own tank. When you go up to him he comes to greet you, swishing his tail and opening and closing his mouth. My family think he wants food, but I know he’s saying thank you.

I do love a happy ending.