It’s become a tradition (if you can call 3 years on the trot) for me to celebrate my birthday in London. Keen to continue it (and reinforce the ‘tradition’ part, so I have an excuse to go again next year) we went to London at the weekend to raise a glass to my advancing years. Because I’d manage to persuade the boys to come too, I wanted to do something ‘cool’. Something an eighteen and twenty year old would find more interesting than just going out for a meal with their doddery old parents. So I arranged to go for cocktails afterwards. In a bar made of ice.

We were invited to arrive twenty minutes before our 11pm ‘slot’, primarily, it became clear, to persuade us to buy another cocktail at the cosy warm bar, before we entered the freezer. Being tight, we spent the twenty minutes deciding on the cocktail we’d have in the ice bar i.e. the one included in the entry price. At £16 each to get in, it was a flipping expensive cocktail. Just before 11pm we queued up to get our capes – with handy attached gloves. No point dressing up to go to this cocktail bar. Anything you wear gets covered with an inelegant blue thermal cape. 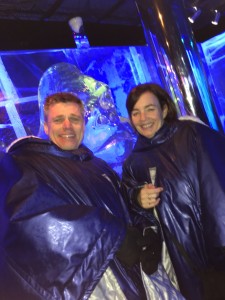 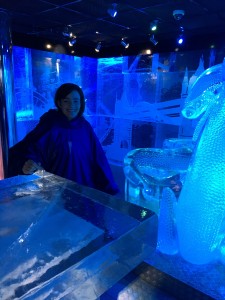 Finally we were allowed in the -5 degree bar. Was the experience worth it?

Experience is the right word. It’s the only time I’ve had a cocktail where the ice was on the outside (cocktails are literally served in an ice glass). 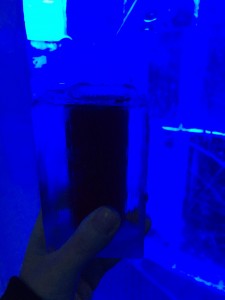 And yes, it was fun to see a bar made of ice, and to stand in a freezer for a while. I certainly won’t forget my birthday, and it did make for some pretty cool photos. 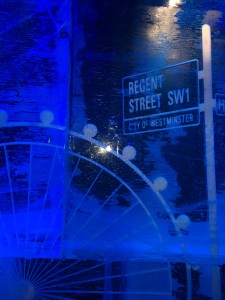 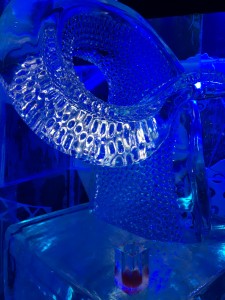 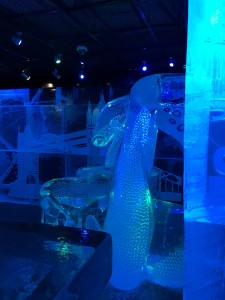 The Christmas story I’ve started now has a title (The Unexpected Christmas, though of course this may change) and is up to 20,000 words (i.e. about a quarter way through). Progress will be halted for a while now though because I’ve just received the edits for my next book, provisionally entitled Crumbs. I last saw this in 2016, so I’m really looking forward to diving back into the lives of Abby Spencer and Doug Faulkner, who meet in a biscuit factory. It may not sound romantic, but hopefully it sounds sweet ?!