An introduction to my next book, edits and the sea

Currently I’m deeply immersed in edits for my next book, Crumbs. 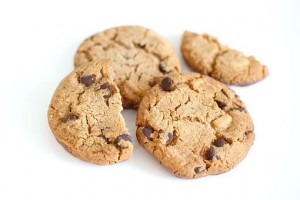 It’s the story of Abby Spencer, who knows she can come across as a blonde airhead – she likes to talk and is a bit of klutz – but that’s not her. She’s helped to raise her sisters and gained a business degree. Now she’s ready to start her career, so she applies for a job at Crumbs, the local biscuit manufacturer owned by Lord Charles Faulkner and run by his son, Douglas Faulkner.

Doug Faulkner – what can I say about him? He’s got wild Irish looks currently restrained in a stuffy managing director suit. He hates his job and hates working for his father even more. When he interviews Abby for the role of his personal assistant, she says more words in half an hour than he manages in a day. So he decides to hire her, just for the hell of it. She might add some spark to his miserable life.

If these crumbs of information have whetted your appetite and left you hungry for more (too corny?!) the book will hopefully be published in a few months time – dependent on how well the editing process goes. So far I’ve deleted a thousand superfluous words, then added another chapter (2,000 words). I’ve thanked my editor for kindly correcting Abby’s age (she’s 24, and it appears I can’t count) and for pointing out that my solicitor appeared to go by two names. As per usual with me, I’ve totally forgotten that some readers do actually like a bit of description. My poor editor felt compelled to point out that she had no idea where they all lived, or over what time frame it all happened. I hope one day I will learn to add such detail without being told, but it appears four years of writing and editing books isn’t long enough for such a miracle.

At the weekend we popped down to the coast (Stokes Bay in Hampshire, for those of you who like the detail…!). There is something about the sea that lifts the spirit, and clears the cobwebs from the mind. It can also be pretty damn deceptive. This is how it looked from the car, when we decided how lovely it would be to take a walk along the prom. 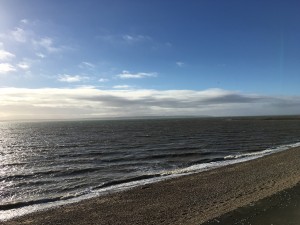 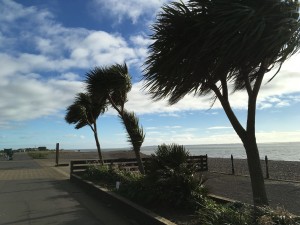 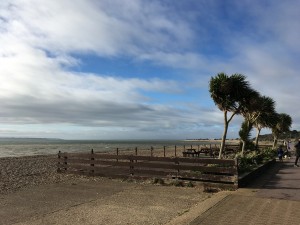 Never mind hold onto your hats, I had to take the thing off my head and clutch it in my hand. Trust me, we deserved the big fry up we had when we made it to the cafe at the end.

Walking back was a breeze, mind 🙂