On Sunday we had a family outing to Twickenham to watch England play Wales. And when I say family, I mean my own family, my brother’s family and mum, too. There was a mixture of girls and boys, ages ranging from 11 to 82, and it says something about the sport that all enjoyed the day, even though only half were die-hard rugby fans. 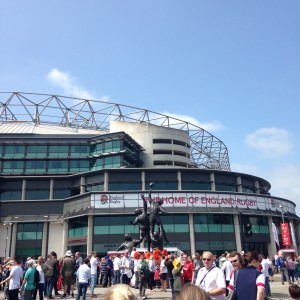 It began with the pre-match build up, with the flags being paraded up the pitch and the stirring sound of the anthems being sung at full voice by 82,000 people. 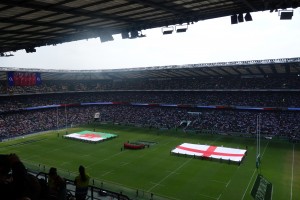 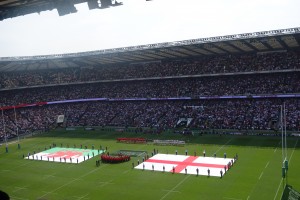 Then there was the thrill of live sport; the thump of bodies flying into each other, the subtleties and skill of the play (most of which went over my head), the surge of players as they storm up the field towards the try line. Added to this we had the almost comical, and definitely cringeworthy, inability of poor George Ford to kick a conversion or a penalty – he managed just one out of six. And sorry no, I didn’t manage to take a photo of him hitting the post. I’m a writer, not a photographer, so here is some…other action.

It wasn’t just the play on the field that was entertaining. The crowds were great value, too. In front of us we had English fans accidentally spilling three of their four pints over the Welsh fans in front of them. The flimsy beer carrier split – that was their excuse and it seemed a good one. There was no swearing, no cross words from the beer soaked men though. Even when the English fans tried to apologise by buying their counterparts some drinks – and managed to spill some of that over them, too – it was met with further laughter.

I would be lying if I didn’t admit that following that, we weren’t furtively glancing behind us, on the look out for people with dodgy beer carriers.

Early in the week I had a brief moment of local fame, when the WindsorSlough Express was kind enough to print an article on my new book, Before You. The photographer had me standing in the back garden next to my cardboard Jenson Button. The neighbours must have either assumed I’d gone totally crazy, or that Jenson has lost a lot of weight. 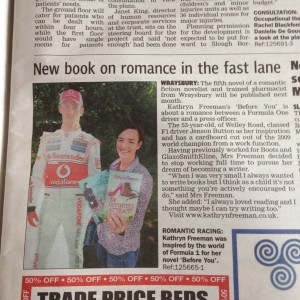 I realised I’m not destined for true fame when the article mentioned my age as being two years older than I am. A true celebrity would have made sure it was the other way round. Still, as my family were kind enough to point out, at least the age matched the photograph…