We’ve crept into September, and though I’m sad to say goodbye to the long, warm days of summer, there is plenty of excitement ahead. Well, for me, at least.

Coming up soon, I celebrate my 25th wedding anniversary. I sometimes wonder, if it weren’t for my husband, would I be writing books? Before you think I’m getting too mushy, that all the romance I pour into my stories comes from him, let me squash that straight away. He’s the opposite of romantic. To give you an idea of what I mean, he proposed in front of the telly, just before his then favourite show came on (Red Dwarf).  When I started to get all tearful, all emotional, all excited about when and where, he gave me a bemused look. ‘Not now, Red Dwarf is starting.’

So no, the romance is all in my head, but the love, well that’s survived twenty-five years and counting. Here we are, back then, all starry eyed and young. In case you’re wondering, it’s Pooh bear and Tigger on his socks. I was just happy it wasn’t Red Dwarf. 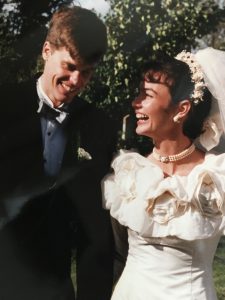 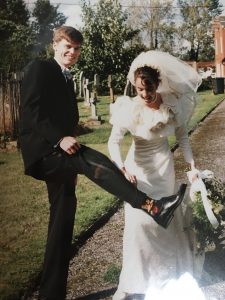 To go back to the question about books though, it was my hubby who told me I should write, and who encouraged me to give up my well paid job and do exactly that. I think he thought I’d get it out of my system. Little did he realise, eleven published books later, I’d still be doing it – and still be loving it.

Little did either of us realise that the very first book I went on to write, and that went on to receive so many rejections it nearly became the last, would actually get published (after being hacked and edited to within an inch of its life). So it’s fitting that later this month, I’ll also be celebrating the release of  Reach for a Star. 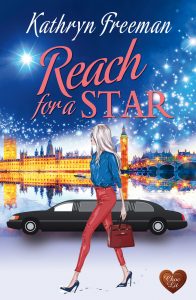 Jessie, my heroine, wasn’t as lucky as me with her marriage. Though she and her ex remain friends, she dreams of finding that grand passion. A man as sexy, as exciting as Michael Tennant, the singer she has a whopping big crush on.

The same singer she unexpectedly finds herself appearing with in a new reality TV show, where professional singers teach hopeless amateurs how to sing.

Will they reach the high notes together? Or will it all fall flat? There’s only one way for you to find out 🙂