Right up your street?

So, here it is, my next book with One More Chapter…..Mr Right Across the Street. 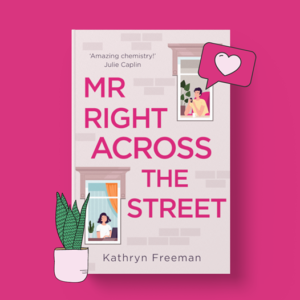 I think this has to be my favourite cover so far. Cute and pink – what more could I ask?!

And here’s the important blurb:

Mia Abbott’s move to Manchester was supposed to give her time and space from all the disastrous romantic choices she’s made in her past. But then the hot guy who lives opposite – the one who works out every day at exactly 10 a.m., not that Mia has noticed thank-you-very-much – starts leaving notes in his window…for her.

Bar owner Luke Doyle has his own issues to deal with but as he shows Mia the sites of her new city he also shows her what real romance looks like for the first time. And when he cooks up a signature cocktail in her honour, she realises that the man behind the bar is even more enticing than any of his creations. And once she’s had a taste she knows it will never be enough!

The idea for this book came from my editor. During lockdown she worked from home which inevitably meant quite a lot of staring out of her window (okay, I’m surmising here, that’s what I spend a lot of time doing…). Anyway, apparently her place looks directly onto to some flats and the more she stared at them, the more intrigued she became by the idea of who might be in one of the flats. What if he was hot? What if he put up a message, just for her?

And so, from that gem of an idea, enter Luke – the hot guy who lives opposite Mia. Intrigued by her, Luke tries to woo Mia by leaving notes in his window. It’s not easy when you’ve only got a limited amount of space to get your message across. And it gets even harder when you’ve got a reputation for being a bit of a player.

To see if he manages to capture Mia’s attention, and perhaps her heart, you’ll have to read the book. Hopefully, after this little intro, it now sounds right up your street 🙂