But with writing, it’s a real art

I have a tendency to write in a rather verbose style – much like I talk. Why use one word, when it’s so much more satisfying to pepper the sentence with lots more? I guess it comes from the fact that I rarely consider what I say before I open my big mouth and say it.

When it comes to my writing, the words flow onto the keyboard in much the same way they flow out of mouth – with very little conscious thought. It means I’m able to write pretty quickly, which can be a good thing. Sadly it also means much of what I write is … umm … no, I won’t go with rubbish. Let’s say redundant. Superfluous.

Of course I can edit them out later, and I try to do this, but I’m still not as good as I should be.

Here are a couple of examples from the book I’ve just finished editing:

Quickly she smoothed concealer under her eyes and dabbed on some blusher.

Quickly she smoothed on concealer and added some blusher.

Out of the corner of her eye, she saw Jim’s mouth turn up at the edges in the beginnings of a smile.

Out of the corner of her eye, she saw Jim start to smile.

I think my verbosity (oh, what a fabulous word) is one of the reasons I find it so hard to write short stories. But I need to crack on and do some, because the discipline of removing redundant words and making my writing tighter (umm, probably I didn’t need the last four words there – it’s already implied from the words before, isn’t it?!) … I digress, the discipline will be good for me.

As was trying to answer this question for a recent interview.

Please summarise Too Charming in 20 words or less.

I got it down to this:

Sexy defence lawyer falls for feisty police detective, wary of handsome charmers. But a murder case forces her to re-evaluate him.

Quick plug: Too Charming is out in paperback from 7th June 2015! 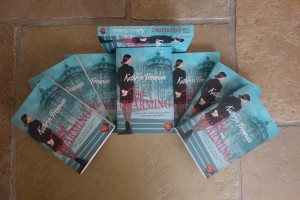