Now I know that most you who are kind enough to read my ramblings will groan at the title (except for my lovely father-in-law. Keith – this one’s for you!). The thing about cricket is that it has a reputation for being a bit, well, boring. And despite the advent of 20 over cricket, there are many who still can’t understand why anybody would want to sit all day watching a few men in white try to hit a red ball with a stick of wood.

Having been surrounded by the game all my life, I’ve come to like it. Not love it, you understand, but like it. As a child I watched it on the television with my dad. After a well deserved break I managed to fall in love with a man who, guess what, didn’t just watch it but played it, too. Marriage led to children, which led to my husband rolling balls at my two sons to hit with a toy bat before they could even stand.

So now I watch my husband and sons play cricket. Below, the batting pair discussing tactics at the end of an over … 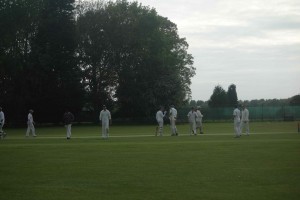 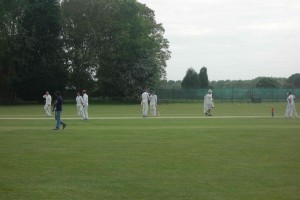 Is it still a bit … boring?

Honestly, yes, it can be. It can also be incredibly cold, heart breaking (getting out to the first ball they face – ouch), worrying (yes I know they wear a helmet, but I don’t like that hard ball getting anywhere near their head). But last Saturday, seeing the last wicket pair of my husband and youngest son bat out 19 overs (that’s 114 balls to you and me) together to save the match, was nail biting. The opposition just needed to get one of them out to secure a victory, but they clung on for over after over, hardly scoring (they needed far too many runs to actually win) BUT not getting out. The opposition went from cocky, to frustrated, to admiring. Here is my son with fielders surrounding him, waiting to catch an edge. He didn’t give them one. 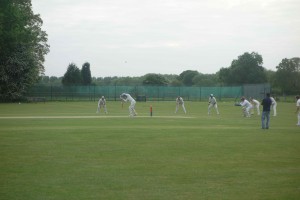 When they came off the field, they were greeted by their team mates like conquering heroes. Yet all they’d done is stodge out 19 overs.