There’s nothing like a life size cardboard cutout in your study to inspire a story.

Authors get their inspiration from a variety of sources. Sometimes a film, a book, a chance conversation. In this case, it was a cardboard cut out.

I’m a massive Jenson Button fan – and yes, I have to admit it’s not all down to his smooth racing style. A couple of Christmas’s ago my husband gave me one of the best presents I’ve ever had – a life size cardboard cut out of Jenson Button. He works for a company who used to sponsor Mclaren and when he saw this in the foyer he asked if he could take it home for his wife. As I often say, heroes come in many disguises. In my view walking through your work car park with a cut out of Jenson Button under your arm, all because your wife is a fan, is pretty heroic.

Here is Jenson, in my study. 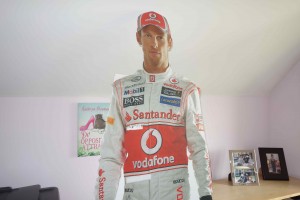 He and I have been gazing at each other a lot over the last few years and it is no coincidence that the manuscript I’ve just finished features as its hero…a racing driver. Of course Jenson is just the inspiration – my hero is nothing like him. But the more I researched into racing drivers the more I was in awe of their fitness and skill so now every racing driver is a hero to me.

My manuscript is now in the hands of the Choc Lit tasting panel and I keep my fingers crossed that they will enjoy it. If they do, it will hopefully one day become a book.

As for the cardboard cut out, it’s still in my study. I might have moved on to writing about a different hero now, but Jenson is still providing vital inspiration.