Who needs the beach?

Last week we went on holiday. Had it just been my husband and me, we’d have gone somewhere warm, sunny and with a beach. Not his choice, but I always book the holidays :-). However our two sons (now 19 and 21) decided they’d like to come with us – though only after I told them they could choose where.

So instead of watching the turquoise blue sea gently lap against the powder white sand, I watched this. 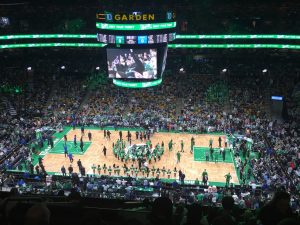 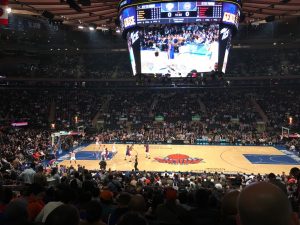 The first photo is from TD Garden in Boston, as we prepared to watch the Celtics, and the second is from Maidson Square Garden in New York, as we watched the Knicks. If you’re interested, the first was an excellent game because the Celtics are very good (apparently). The second was watched mainly by tourists, as the Knicks are rubbish and New Yorkers are, no doubt, fed up with them. None of which I knew before I went, but my basketball loving sons have enlightened me. If you’d asked me if I ever wanted to watch basketball live, I’d have said no thanks. But boy did I enjoy it. There is something about live sport, and the atmosphere it creates, that is really compelling – the two glasses of wine I drank while watching the Knicks no doubt helped my appreciation.

Aside from the basketball in Boston, we also had an (apparently compulsory) visit to the home of baseball, Fenway Park. Sadly the Red Sox season hadn’t started yet. That’s something for the next visit. 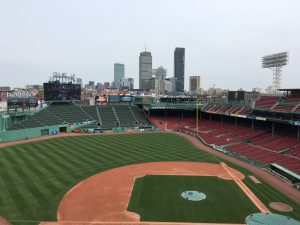 We did get out and about and visit the other delights of Boston, and though I didn’t get my beach, I did get sun and blue skies. Shame it was only about 12 degrees. We found ourselves trying to hide our British accent at the Boston Tea Party museum… 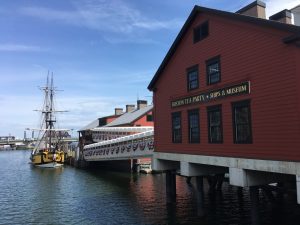 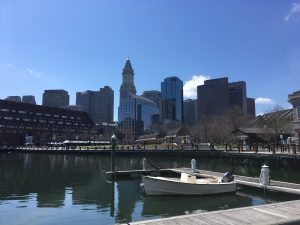 From Boston we took the train (4 hours; easier, and considerably cheaper, than the plane) to New York where we were immediately hit by the change of pace. Dirtier, noisier, busier but, once you’d got used to that, also more spectacular. We last visited New York during Superstorm Sandy – not the best timing, but it did give us a unique perspective – below is from the Top of the Rock, and you can see the lack of lights in Wall Street where the power failure lasted for days. 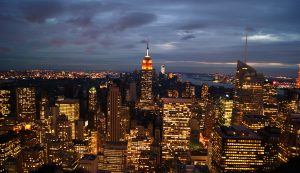 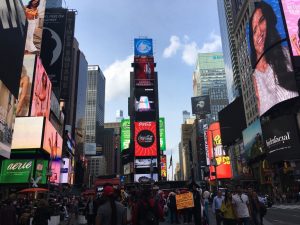 Though many sights were the same this time – like the craziness of Times Square – it was fabulous to see so many new (to us) sights. For example, we found the High Line – a 1.45-mile-long elevated walkway created from the former New York Central Railroad. Amazing to walk up high over the streets of New York and not have to keep stopping every block to wait to cross the road! We were also really impressed by the 9/11 memorial. At our last visit that area was still being built. Now there is an eye-catching new World Trade Centre, an absorbing (and at times harrowing) museum and two poignant memorials that represent the footprints of the original towers. 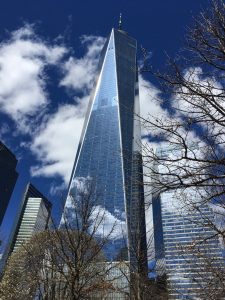 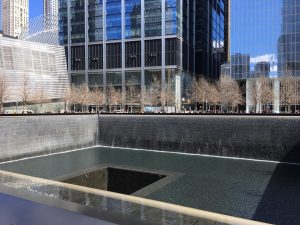 There is also the Oculus – this amazing dinosaur skeleton like structure that encompasses a shopping mall. It looks truly, as the Americans like to say, awesome, both above and below ground. 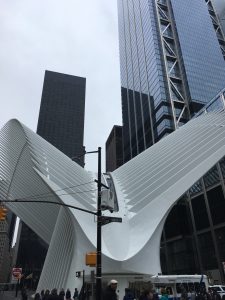 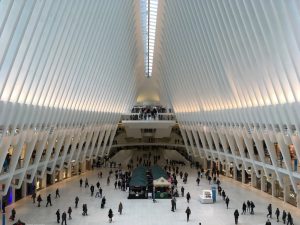 Finally, we managed to see her. After the storm, the harbour was closed and we missed out on one of the iconic sights of New York. This time we got to see The Statue of Liberty up close and personal. 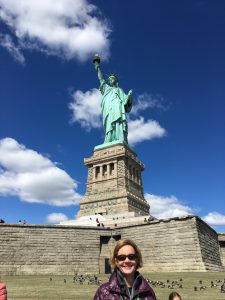 A blog on New York wouldn’t be complete without a photo of a typical American breakfast. Yes, I ate it all. But only after my son had persuaded us that we should take a taxi to the top of Central Park and then run all the way through it (plus the extra mile back to our apartment). Five and a bit miles later, I can tell you, I deserved every calorie 🙂 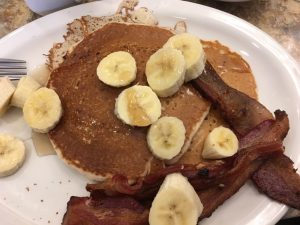