A day at the races

I was lucky enough to attend Royal Ascot yesterday – and wow, just wow. The weather tried to put a dampner on the day, and I lost far more money than I won, but what a privilege it was to be at such a special occasion. It was, at times, like one big wedding; the hats, the stunning outfits, the flowers. It was elegant and people were happy, friendly and merry in that way of those who’ve had one too many glasses of the bubbly stuff. 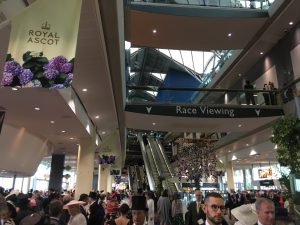 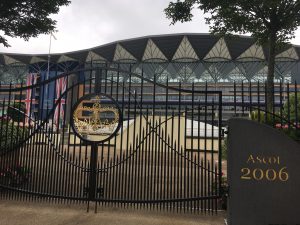 Speaking of weddings, I knew I had outfits (with hats) from two recentish weddings, so I’d been relaxed about what I was going to wear, until the night before, when I’d looked at the forecast. Not a warm sunny day then. Rain, temperature hovering around 18 degrees. That put a different spin on things. Now I wasn’t looking just at the dress, but at the jacket, too. And now nothing worked. In the end I went for a wrap, and heels that were far too high for me to navigate the tricky 10 minute up hill walk to the racecourse from the station. Flat sandals that fit into handbags are a Godsend. Photo on the left, carrying the shoes. Photo on the right, wearing them! The man standing next to me isn’t just someone I grabbed for the photo – it’s my husband. And yes, that is our umbrella, which did rather clash with my outfit… 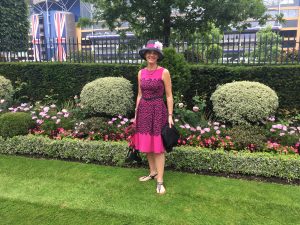 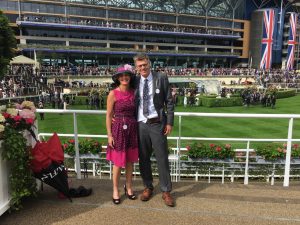 We looked like we were going to a wedding then, and the tables were set like they would be at a wedding. 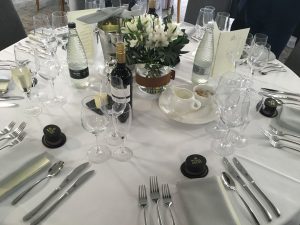 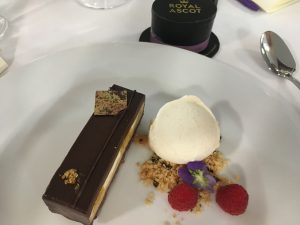 We were also drinking champagne at 11 o’clock in the morning… which might have a lot to do with why I lost a lot more money than I won. That’s where the resemblance to the wedding ended though. Yesterday I got to view beautiful thoroughbred horses as they were paraded around the paddock area before the race. 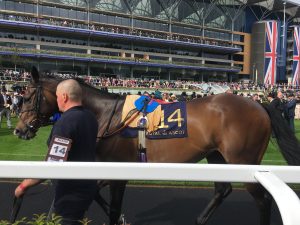 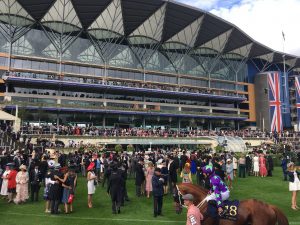 I watched the same horses then charge along the final straight, although sometimes the view was obscured by the rain. And the horses I’d pre-selected weren’t always/often…okay, only once was one in the front. 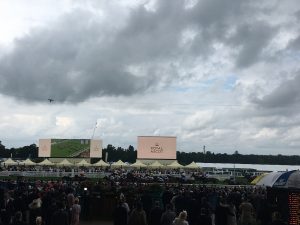 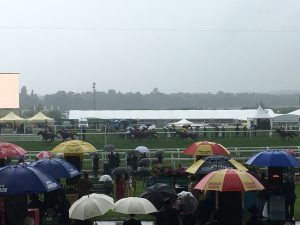 Yesterday I also saw the Queen. It was drizzling, but the umbrellas were put away the moment the carriage arrived in the paddock, much to our delight, and our utter respect. 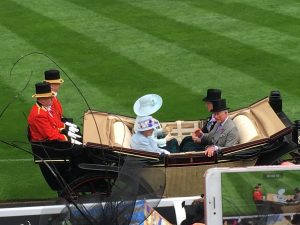 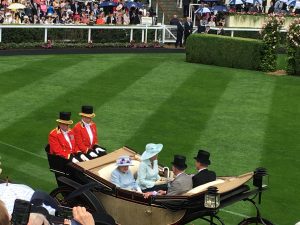 Sensibly though, she got to watch the race from this curved glass box. 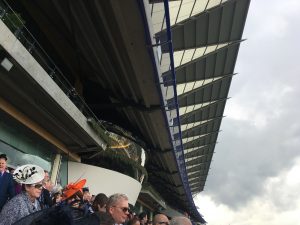 For the final race, my husband decided to put all our cash ‘winnings’ (the credit card had taken a hit earlier with our bets) onto the horse Frankie Dettori was riding. He’d already had two winners and a second place, so perhaps not such a rash bet. Until we went to the paddock. The horse and Frankie didn’t seem to be getting on, with the horse shuffling him off as soon as he’d tried to mount. 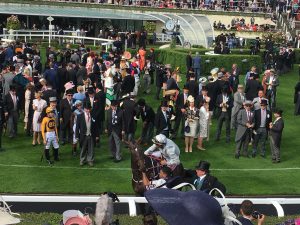 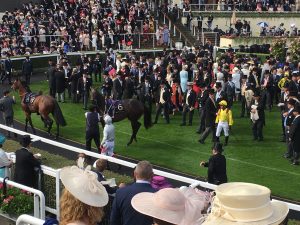 I don’t know where the horse ended up, but I can tell you this much. We didn’t drink any further champagne.

Still, our gambling losses were a small price to pay for a fabulous day out 🙂