From windows to bannisters.

A few weeks ago we had new windows put on the front of the house. It’s a job we said would be the first thing we did when we moved here 19 years ago. But hey, at least we finally got round to it, yes?

It’s claimed they’ll help reduce the noise from the road, and the overhead planes, and reduce our heating bills, though considering the cost of the damn things, the latter is a bit of a stretch. They do look smart though, both inside and outside the house. What I hadn’t factored in, was how much work they would involve. Not the installation, that fell to the window fitters. Thank God. Rather them than me hanging out of the first floor bedrooms… 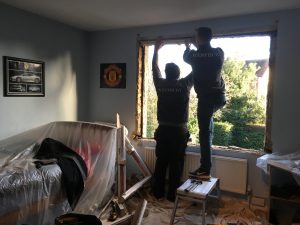 Inevitably though, the windows didn’t just slide in – ours is a hundred year old house, and nothing eases in, trust me. So now, having had 6 windows fitted, we have six rooms that need redecorating.

While we argue over colours, we thought we’d start on the front door. You see the new windows aren’t white, they’re off white. Yet the front door was white. So we painted it. And because we’d painted the outside, we thought we should paint the inside the same colour. Which then made us realise how shoddy the rest of the woodwork was in the hallway, so that had to be painted, too. Finally, our eyes were drawn to the bannisters, which had been white, once upon a time, but were now yellow. And definitely didn’t match the newly painted door.

Here’s me in action (I don’t believe in dust sheets, or masking tape. That’s what kitchen roll and wet wipes are for). The junk on the stairs is the front door furniture which we now realise is brass, and doesn’t go with the new off-white colour scheme. A nickel knocker and letterbox has been ordered… 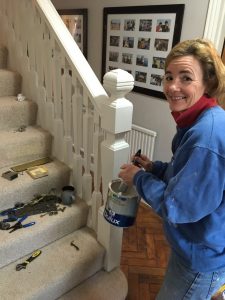 Finally, that look of gritted teeth agony on my face? That is real. There’s a reason the start of the word painting begins with pain. Next time the bannisters need doing, we’re getting a decorator in. Or moving.