What’s in a title?

I have four books coming out between August and November (boy are you going to be sick of me banging on about them ). Two new ebooks and the paperback publications of Before You and A Second Christmas Wish. All of them have different titles to the ones I submitted. You could ask what does that say about my title creation skills, but I’m going to ignore you. Instead, how about, what were the titles I submitted and why were they changed? Well, funny you asked…

This started off as Over the Line, as I was trying to match the title to the racing theme of the story. Stupid idea. The main theme of the story is love – my target audience those who enjoy romance. My hero just happens to be a racing car driver. So the title was changed to one that fitted with the romance, not the sport.

Before Aiden met Mel, racing was his life. He was obsessed with the need to prove he was as good as his father. Before Mel met Aiden, she was was burying the feminine side of her. She didn’t want to open up to being hurt again. 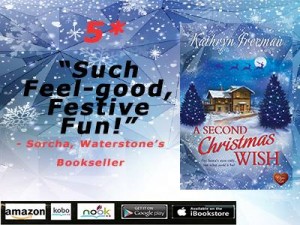 This started off as A Second Wish – yes, a title I didn’t get far wrong. My publisher added the word Christmas because, funnily enough, that is a key word for a book you’re targeting for the Christmas market…

This is the story of supermodel Lizzie Donavue and quiet, reserved accountant Nick Templeton. I mentioned on a previous blog (13th April) that when I wrote it many years ago (before I was published) it was originally called Coming Home. I changed it to Too Nice after I had it professionally critiqued because one of the criticisms was that the hero, Nick Templeton, was too nice. Ha, I thought, I’ll show them. I’ve since thoroughly re-worked it (okay, okay, all the criticisms were justified) and Choc Lit will be publishing it on 1st August. They felt Too Nice was a bit wishy washy – hence the addition of Damn. I love it. Definitely appeals to my writing style.

My Christmas book has a proper title! Provisionally I’d called it The Christmas Hotel but Choc Lit have taken a look at it and, noting the name of the heroine of the story, have changed it to A Little Christmas Faith (yes, they’re far cleverer than me). You see Faith is the owner of a new boutique hotel in the Lake District. After months of building delays she’s excited to be opening it two weeks before Christmas. What a way to celebrate the season. Her first guest is Adam Hunter. He’s come to the hotel to escape Christmas…

So there you have it. Thinking up two or three words to sit on the cover of a book – not as easy as it sounds. Even if you’ve written the 90,000 words inside it.